Carrowmena Adventure Team does The ‘Belfast City Marathon’ 2nd May 2016

Carrowmena Adventure Team does The ‘Belfast City Marathon‘ 2nd May 2016

The ‘Carrowmena Crew’ don’t like to stand still and are always up for a challenge, and what better way to spend the bank holiday Monday (apart from Glamping & taking part in activities at Carrowmena of course) than to run this great event as a team. 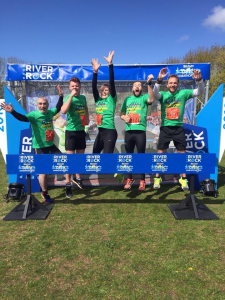 The Carrowmena Team relay team were numbered 5121 and consisted of Lottie, G, Kieran, Willis and Richard (Lottie’s Brother-in-law from Bermuda – and yes I agree… running a marathon on Holiday = CRAZY)

Our trusty Cheerleader Christa was there enjoying the day and cheering the team on through every mile!

The Carrowmena Team where on the road early from Limavady, with the Carrowmena Camper on the go at 6am! At 7:30am the crew assembled at the Odyssey and a plan was produced by Lottie.

The race started at 9am and the first leg of 6.2 miles from City Hall to Bridge End would be ran by G, Kieran would then take up the pace and run the second leg of 3.4 miles from Bridge End to Hillview Road. Here Lottie would stretch her legs and cover the 7.1 miles to Gideons Green (she organised so took the longest & hardest leg) where the Holiday maker Richard would be waiting to cover the next 4.6 miles. Then it would be over to Willis to blast to the finish from Corporation Street and bestow the glory onto ‘Team Carrowmena’. 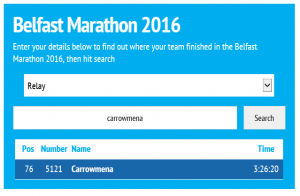 This is an amazing achievement for the team – and a huge ‘Well Done’ to all involved in the organising and marshalling etc..

After an exhausting morning, the team then headed to Cosmos restaurant for some well-earned ‘All you can eat’ Chinese, which may I Add Willis took full advantage of… #athletesofthecentury 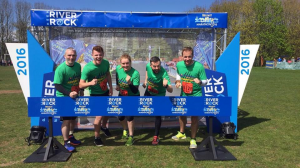